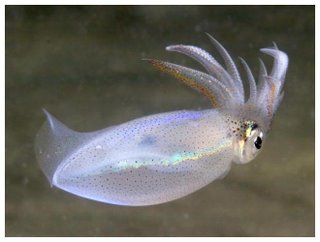 Norwegian: akkar
Distribution: There are registrations of flying squids from the surface and down to 4000 meters. It can be found in the entire North-east Atlantic ocean and hence anywhere along the Norwegian coast. Juveniles appearing in shallow water close to the shore is most frequently encountered by divers.
Characteristics: The this ten-armed squid has an elongated, torpedo shaped mantle. The mantle constitutes approximately two thirds of the total body length, including the arms. The relatively high density and considerable size contributes to a significant commercial interest in this squid. It can grow to a length of 1 meter.