Sediment Over The Great Barrier Reef 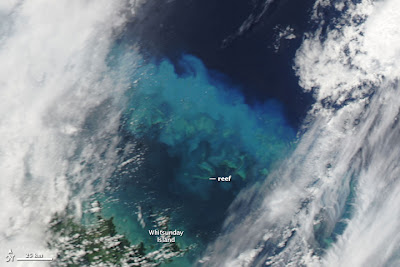 With high winds, a powerful storm surge, and torrential rains, Cyclone Yasi churned the waters of the Coral Sea off Australia’s Queensland coast. On February 4, 2011, as the clouds began to clear, evidence of the storm’s violence lingered in the water. The normally clear, shallow water of the Great Barrier Reef was clouded with sediment brought to the surface in the turbulent water.


Light reflects off the light-colored sediment, turning the ocean electric blue. Sections of the reef are visible amid the clouded water. The reef has well-defined shapes and is greener than its surroundings. The section of reef shown here is near Whitsunday Island National Park. The large image, which shows a wider area, reveals sediment in the water along much of the coast.

How many cyclones, crazy storms and floods do we have to see and experience until we understand that we are in the end stage of carbon age, and the big changes in climate will stop us by force from hurting our environment... Our heart is with the people of Queensland who are paying for the mistakes of the whole humanity... and the big question is: who is next... or maybe what's next?
Posted by Sassine And Marwa El Nabbout at 9:46 AM No comments:

Toulouse In The Mirror

Toulouse In The Mirror
I still remember that afternoon... it made me forget myself, the hidden pains and the threats that were struggling my heart... That's how God magnificently treated my instability...
Toulouse... I will always remember your beauty, and the eternal friends that made me feel that I'm still a human being...
Posted by Sassine And Marwa El Nabbout at 4:55 PM No comments: