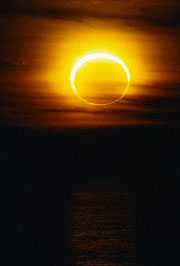 "Solar eclipses are spectacular to watch because of the drama of the sky going dark in the daytime, the blue sky going away, the rapid changes in the sun".

"We are studying how the solar corona got to be 2 million degrees [Celsius], what its polarization is, and how features that form on the solar surface propagate into the corona and even out to the Earth," he said.

Observations of the corona are possible from Earth only during the brief moments of a total solar eclipse. The corona is usually hidden by the blue sky as it is about a million times fainter than the photosphere, the layer of the sun seen shining every day.

When the moon's elliptical orbit around the Earth takes it directly between the sun and Earth, it blocks out all or part of the sun, depending on the Earth's distance from the sun. Total eclipses happen, on average, every 1.5 years.

"Having the sun only 9 degrees from the horizon will enable some photos including the sun and the horizon on the same frame with a bigger image of the sun than previously possible," said Pasachoff.

While some astronomers are excited for the sunset spectacle afforded by this eclipse, Pasachoff says that it will make scientific experiments more difficult because sunlight will have to pass through so much of the atmosphere.

The first of their experiments is to search the corona for high-frequency solar oscillations—rapid vibrations. Some theoretical models hold that these vibrations enable the corona to reach a temperature of 2 million degrees Celsius (3.6 million degrees Fahrenheit) while the surface of the sun is about 6,000 degrees Celsius (11,000 degrees Fahrenheit).

Using observational data gathered during the 1999 eclipse expedition, Pasachoff and colleagues published a paper in the June 2002 issue of Solar Physics on the detection of coronal oscillations, verifying a set of theories on coronal heating through magnetic waves.

"There are theoretical predictions by other astronomers about models of coronal heating and I, as an observational observer, look for observational tests of those models," explained Pasachoff.

Pasachoff says that sunlight reaches Earth from the corona from three different sources: light actually emitted from the corona; light from the sun that is reflected off coronal electrons towards Earth; and light added to that light from the reflection of dust particles near the orbit of Mercury.

A full image of the corona will allow astronomers to trace the coronal streamers that they see in the outer and middle corona to the streamers' roots on the sun's surface and to see the region of the corona where the solar winds form, said Pasachoff.