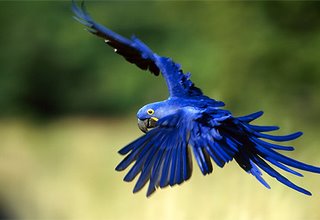 Many macaws have vibrant plumage. The coloring is suited to life in Central and South American rain forests, with their green canopies and colorful fruits and flowers. The birds boast large, powerful beaks that easily crack nuts and seeds, while their dry, scaly tongues have a bone inside them that makes them an effective tool for tapping into fruits.

Macaws also have gripping toes that they use to latch onto branches and to grab, hold, and examine items. The birds sport graceful tails that are typically very long.

Macaws are intelligent, social birds that often gather in flocks of 10 to 30 individuals. Their loud calls, squawks, and screams echo through the forest canopy. Macaws vocalize to communicate within the flock, mark territory, and identify one another. Some species can even mimic human speech.

Flocks sleep in the trees at night, and in the morning they may fly long distances to feed on fruit, nuts, insects, and snails. Some species also eat damp soil, which may help to neutralize chemicals in their fruity diet and ease their stomachs.

Macaws typically mate for life. They not only breed with, but also share food with their mates and enjoy mutual grooming. In breeding season, mothers incubate eggs while fathers hunt and bring food back to the nest.

There are 17 species of macaws, and several are endangered. These playful birds are popular pets, and many are illegally trapped for that trade. The rain forest homes of many species are also disappearing at an alarming rate.

Hyacinth, red-fronted, and blue-throated macaws are seriously endangered. The glaucus macaw and Spix's macaw may already be extinct in the wild.

Posted by Sassine And Marwa El Nabbout at 9:47 PM