From Flood to Drought 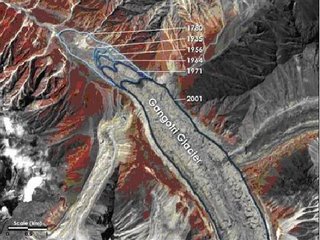 This false-color NASA image shows the approximate retreat of the Gangotri Glacier (source of the Ganges river in India) in the Himalaya mountain range between 1780 and 2001.
Because of global climate change, the glacier has been retreating at a rate of 23 meters annually, according to a WWF report.
Due to the global warming effect, (as many hundreds millions Tons of carbon dioxide and many other industrual gases are diffused in the atmosphere each year), glacial melting will increase the volume of water in rivers, causing widespread flooding. "But in a few decades this situation will change, and the water level in rivers will decline".
Until when we will continue to destroy our earth?!
Posted by Sassine And Marwa El Nabbout at 7:49 AM