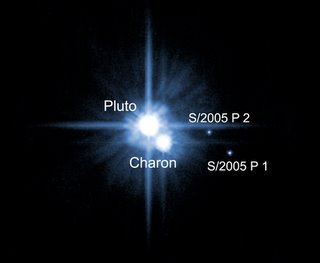 A Hubble Space Telescope image released yesterday confirms what a fuzzy shot taken last May only hinted at: Two more moons have been found orbiting Pluto, making a total of three.
The new picture, captured on February 15, shows S/2005 P 1 and S/2005 P 2—catchier names will come later—faintly glowing in the starlike shine of Pluto and its other moon, Charon.
Astronomers led by astrophysicist Hal Weaver of Johns Hopkins University in Baltimore, Maryland, estimate that P 1 is 38 miles (61 kilometers) in diameter, versus P 2's 29 miles (47 kilometers).
The newfound moons orbit on the same plane as Charon. This suggests that all three moons were born from a cataclysmic collision of two Pluto-size objects millions of years ago, the researchers write in a report in today's issue of the journal Nature.
So the "twins" are true, but that's only the beginning of the story. Weaver and his team will train Hubble's eye on Pluto again next week for a clearer picture of the moons' sizes, shapes, and colors.

Ted Chamberlain
National Geographic
Posted by Sassine And Marwa El Nabbout at 1:35 AM